It is no secret that San Francisco is known for its many different cultures of food–from China Town to Little Italy, this city has amazing food written all over it. And, while we were there, we tried a little bit of it all.

Our first day in San Fran, we spent most of our time at Fisherman’s Warf and Pier 39. I know, we are total tourists, but we wanted some fresh seafood and to see the sea lions! For a quick lunch, we stopped by the Crab Stand for some fresh clam strips. I am really not a huge fan of anything breaded or deep fried, but sometimes on vacation, you just gotta let go! And I have to say, these were some of the most delicious and fresh clam strips ever. Even the breading was light and crisp. Oh, and don’t forget the tartar sauce and mini bottles of wine. This made for a great, quick lunchtime snack. 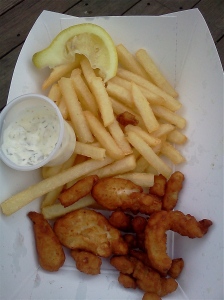 That night was all about getting the most fresh seafood piled on our table as possible. Right on the warf by all of the fresh seafood stands, there are several smaller restaurants–it was quite difficult to narrow down which place was going to be the best, but we ended up at Sabella’s and LaTorre’s. I am pretty sure that we would be getting the same crab and shrimp anywhere on the warf, but this place was pretty great. Well, actually, let’s just say the seafood was pretty great. We had a full crab and peel-and-eat shrimp that were spectacular–the clam chowdar was ok and the salad with bay shrimp was alright. But the crustaceans took the cake and put us straight into a seafood coma! Be prepard to spend some $$ at this place as well. We spent about $100 when all was said and done, but the seafood was definitley worth it. You can’t get anything that tasty in Salt Lake. 🙂 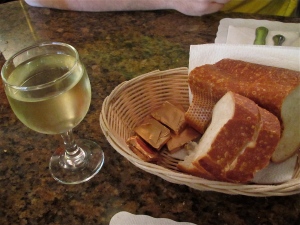 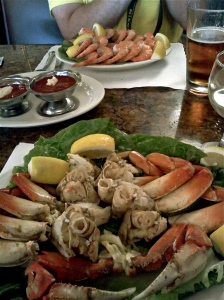 The next day we experienced foods from all parts of the world. We started the day in Chinatown and found the most amazing Dim Sum eatery called You’s Dim Sum. For about $6 we got fresh potstickers and dim sum that will make your mouth water. The atmosphere was nothing to brag about–all the tables and chairs were mismatched and there was hot sauce in a tupperware container on the table that I am pretty sure would have melted my soul–but the food was excellent.

Later that afternoon we made it to the Little Italy part of the city where we found the most amazing coffee shop, Cafe Greco. I am a fan of Illy coffee and espresso, and I am a firm believer that coffee shops who stick with this brand are usually the bee’s knees. This was a great little afternoon spot for kicking back, sitting on the patio, and people watching. 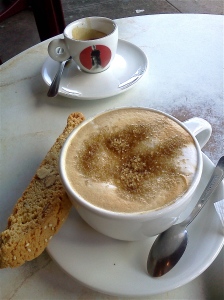 Cafe Greco also is right up the street from a delicatessen that sort of blew my mind. Molinari Delicatessen, was by far, one of the coolest places we went to. I have never seen anything quite like it in Salt Lake City. This is probably due to our strange liquor laws and the fact that we can’t just sell wine in an Italian store like a normal city. The shop held all of my favorite things under one roof. I was in heaven. My boyfriend ordered a pricuitto and fresh mozzarella sandwich and I stared at the cheese and olives for a good half hour. I could put a bed in the corner and live in this place! AMAZING! 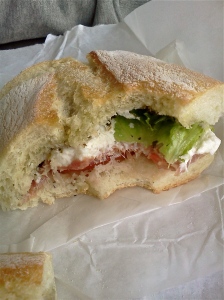 We ended the day with some sushi that was recommended to us by locals at a bar we had gone to the night before called, Nara Sushi. It was pretty ok. Nothing that really blew my mind–and the atmosphere was more like what you would find in a strip mall and not a highly recommended sushi restaurant. The sushi was good–the sake was good. But nothing was really amazing. I think my boyfriend enjoyed it quite a bit, but something was a little lackluster. I have a feeling there are better sushi joints in the bay area. 🙂 Just my opinion…which is kind of what this site is all about!

Overall, the eats in San Fran were optimal. Get yourself some fresh seafood and spend an afternoon checking out the Molinari Delicatessen. Ms. Maven says so!

This entry was posted in Foodie, Restaurant Reviews. Bookmark the permalink.